Bluenose weekend by the numbers

This year I didn't participate the Bluenose race weekend. Instead I watched from the sidelines to see others finish. In terms of local races I'm going to run Cabot Trail, with its strong tradition of international attendance and community support based around Baddeck, NS.

My goal this weekend was to watch runners I knew personally, and to see this year's contingent of Kenyans including World Champion Abel Kirui (it's an interesting story why he's in Halifax, for there is no prize money or appearance fees in these races). Little surprise Kirui won the half marathon by over 15 minutes (and while not, I suspect, running his hardest).

But besides playing spectator, I was also interested to see how Blue Nose attendance would fare. To get right to the point, below are the 5/10/half/full finisher totals from 2004 to 2015. I do not include the kid's 2/4k runs. Although they do generate money for the race, it is unfair to call under-12 runners "competitors". It is more straightforward to count only those who've registered themselves.


There are at least two interesting trends I see in the above figure. First, contrary to what the BN organizers imply, the downslide in attendance began last year, not this one. Although the maritimes did have a long harsh winter, the 2014 weather was quite typical. No rise in numbers should have been anticipated even a year ago. Secondly, the number of marathon runners actually increased from last year (322 from 286). If weather was to solely blame, the biggest losses should be for the longest races. Rather the marathon got a small boost and 5/10/21.1k races all saw near identical drops in numbers (84-86% versus last year's totals).

There is a growing concern that the road race market is becoming saturated. Even in a small city like Halifax there is seemingly a race every weekend, and too often the same weekend. For example, in the maritimes on May 30-31st we will see a 5 miler in Miramichi NB, an 8k trail run in Hopewell NB, the 5k Penguin Run in Enfield NS, another 8 miler in Wolfville NS, and finally a 5/10/half in Sussex NB. These races are vying for participants culled from a population base no larger than 1.5 million.  Worse still, as seen in the population trees below, the majority of residents in this area are middle aged or older (Maritimes in general show maxima around 50 years of age). Compounded by many students leaving this province during the May-August period, as years go by we might expect an ever-shrinking 'dedicated runner' base. The story varies for Canada at large, as younger populations in BC and Alberta keeps their numbers strong, and larger races in Ontario and Quebec (e.g. Ottawa Race Weekend) are satisfied with their current totals (any race with a 'cap' is safe for now). Yet even in Ontario, small races can suddenly evaporate, like the Billy Taylor Memorial 15k in Guelph. Total participants in the USA have not yet peaked, but what will happen when they do? In one sense Nova Scotia may be acting as the canary in the coal mine for North America.

For the racing scene out east, where races rarely sell out and top runners often prefer Boston or Philadelphia over a local event, this could all lead to a micro bubble burst. Unlike real-estate, however, the permanence of road races is rather imaginary and the cost put up by 'investors' (the runners themselves) is small. After the pylons are stacked and barriers taken down, there is little evidence of any event having taken place. Overall, the stakes are not that high. From the perspective of would-be runners such a collapse will simply lead to fewer races, which given the market may be barely noticed. If the too many races leads to a net race fatigue (or malaise?), one indirect consequence could be a loss in absolute numbers. How many casual will suddenly realize it costs about the same to play 18 holes of golf as run a 10k? (you might even burn more calories) No sport is safe from people finding other means to exercise.

Small races adjacent to Blue Nose are feeling the same pinch. Charting the attendance numbers of both the Halifax Lung Run 5k (May) and Navy 10k (August), the peak attendance was seen several years ago. Weather might be blamed in 2015, but not for all years since 2012. 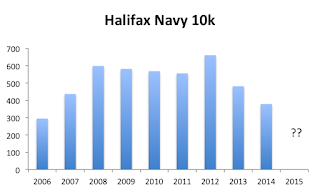 This is a terrifying time to be a race organizer. Money for races has to be put up front (in particular for timing services), so the more fickle your participation base, the worse off you'll be. Ideally you want a constant number of community-oriented attendees to help keep the race stable. 'Community-oriented' can mean many things, but at its core it's means extroverts that bring friends to races, and who'll come to your event rain or shine. Races need people like Halifax's Michael Bergeron, who joggled this weekend's half marathon in a fantastic 1:28.

An example of a race with a strong core is Newfoundland's Tely 10. They are expecting 4500 runners this year, their highest ever. But this is a race which began in 1922 and never saw more than 100 finishers until the 1980s, when it began to transform into a mass-participation event. Were numbers to fall, the race is framed by a tradition of competition and strong spectatorship (both of which the BN race sorely lacks). Ask St. John's natives if they can name at least one recent winner of the Tely and I bet at least half of them could. If absolute numbers suddenly fall, the race will carry on, just as it had for 60 years prior to the attendance boom. Another example is the Johnny Miles Race Weekend, which imposes a cap on participants. Consequently their attendance has been steady for the past five years. In terms of keeping fees affordable, every year they also host a free student 5k drawing in 200-300 young runners.

For race organizers fearful of the future, there is no obvious solution. It takes as much time to produce a good race as an aged bottle of whiskey. NYC, Boston, Ottawa; none of these grew up overnight. Hence it is probably easier to improve an existing race than create a new one. And some races are best small (there really is no such thing as a mass-participation 1500m track race).  Besides quality and quantity, it also takes the financial discipline to succeed. And being a strong negotiator, striking deals with a learn-to-run clinic, getting sponsors to give out post-race food and gift cards for prizes, and find good deals and keep on good terms with the city for road closures. Running a successful race is probably harder than a running successful restaurant.

Ultimately maybe nothing will change, and the race scene will be no different now than in 10 years. But given the number of races, and the number of runners, I would bet against the status quo. The winds of change are blowing.