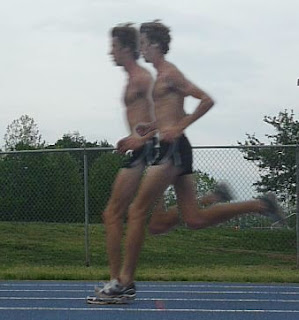 This post is a sequel to a previous post about the invariance of running energy expenditure with respect to distance. The topic I wish to cover here is a back-of-the-envelope estimation for total impact force of a running step. In other words, how many G-forces does your body experience with each footstep? Before I get to this question I will recap some of the previous post below.

What I said before was, using some actual physics equations (hence the title), was that faster running does not burn more calories per kilometre*. I derived the following formula

using the assumptions 1) that each step from one foot to another follows the usual symmetric parabolic arc and 2) there is no wind resistance and 3) the take-off angle of each step is 45 degrees (which is a poor assumption but in this simple-minded case gives an energy minimum for running under the given goal of minimizing energy cost). I changed the 'equal' sign in the original equation to a 'less-than' sign, since the true energy cost of running is lower, at about 0.97 kcal/(kg*km). A more complex model would make some approximations of energy transferred using a spring/level system, but I'm not going down that rabbit hole. The ratio of my predicted vs actual calorie cost is 1.17/0.97 = 1.21. Hence I overestimated the cost of running by 21%, which is not bad for a ridiculously simple inequality (containing only the gravimetric constant g).

I finished the post with a formula that relates the approximate takeoff angle, theta, with horizontal running speed vx, and turnover rate R, in steps per second (plus the gravimetric constant g):

For a visual reference the angles of running as related to various trig relations look like this: 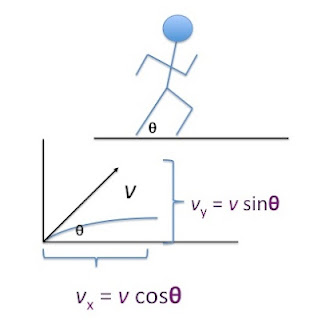 I mention this data again because this material is a good launch point (literally) for what I want to describe next: impact forces while landing. I'm also going to use some of these formulas for the second model.

Branching off from the discussion on energy expenditure I now want to tackle a related question concerning g-forces. So I ask myself 'can the running forces as experienced by your foot be calculated using similarly simple assumptions?' I will calculate these g-forces by dividing the change in speed of one's vertical component of motion, vy, by the time it takes to complete a footstep, delta t. Dividing change in speed by time is, by definition, acceleration of a body, i.e.

This will, however, at best account for the average force experienced by the foot over a given landing/takeoff interval. My quest is to find a reasonable value for the delta in both the numerator an denominator. But I'll jump ahead and tell you what the answer is: empirically we expect the maximum g-forces to be less than 3 Gs (or more precisely in the range 2.5-2.8). The average forces over the entire interval should be about 2/3 the peak value**, which means we desire an average force of about 1.7 to 2.0. Impact force plate analysis studies are easy to come by, such this one, from which I borrowed a representative image using units of G: 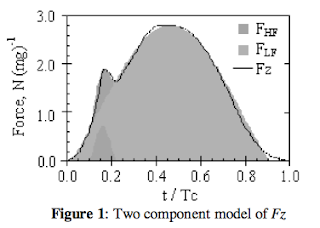 The next step is determining vy. This is done using the tan function I gave above. Since the vertical and horizontal components of motion are also simply related by a tan function

we can insert this into the earlier tan function and we have a relation for the vertical component,

(I should point out this value is true only for the moment of takeoff and landing. Obviously at the maximum height in mid-stride vy = 0). The change in speed during the moment of impact is therefore

Assuming R is close to 3 s-1 (or equivalently about 180 strides per minute, although this can vary) then we are done with the numerator. The larger R becomes, the smaller the impact forces. And the acceleration g is always constant at 9.81 m s-2 (unless running on the moon!)

The minimum time that a foot strike could possibly occur is equal to the length of your foot divided by the speed of travel. This assumes both the heel and forefoot touch the ground, regardless of order (i.e. not just running on one's toes). This is a good assumption for any distance over a few hundred meters. The minimum impact time is then

Given the average male foot length is about 26.3 cm, and assuming running speeds in the range 4 to 6 m/s, this leads to a range of t values between 43 and 65 milliseconds. Combining this with the vertical change in speed dvy we find G-forces are between 5.1 and 7.7 Gs, i.e.

Assuming a parabolic arc shape for the force impact curve, the maximum value, assuming a parabolic force distribution, is actually 1.5 times these numbers. What we are effectively saying is for a runner going 6 m/s will experience a peak impact force of 7.75*1.5 = 11.6 Gs! Recall we were expecting a peak value between 2 and 3 Gs. These values are too high and clearly something is amiss.

A brief aside on the shape of the impact curves

Estimating the duration of impact is more difficult; many a paper have been devoted to the details of foot strike. Here is Daniel Lieberman's force-plate data on three kinds of running styles which all take about 0.2 seconds to perform:

Notably all of the impacts are very parabolic in shape and the impact times remain more or less unchanged. The heel strikers have a sharp spur, but if were to draw a line of best fit they'd all have a parabolic look to them.  Obviously I'm not the only one who first noted this. This paper I found while browsing shows a parabolic fit works quite reasonably:

Why does our estimation of force not match the experimental values? Armed with some more information from the above plots it seems clear the answer is that the impact time we estimated was too short: we estimated less than 100 ms when the real value is closer to 200 ms. The reason for this is that we did not account for rear leg extension.

Assuming a runner fully extends his or her legs to a straight kickback, they will have more ground contact time. At full extension a (roughly) 90 degree angle between their legs and this will lead to more time of impact. A runner's impact stance should look something like the following diagram: 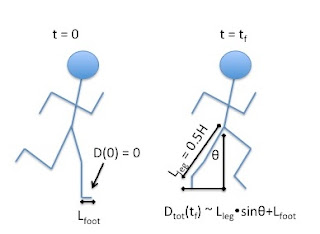 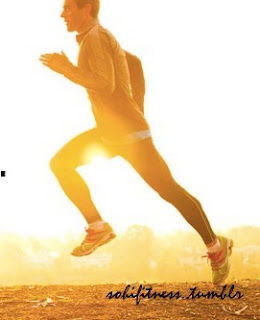 Now the length of a leg from heel to hip is roughly half a person's height, hence

If there's a 90 degree angle between the legs at push-off, then an approximately 45 angle exists between the leg and a vertical line. It's not important if this is exactly true. The point is to see if an approximation of ground contact time is feasible to guess at. We push onward.

Now to revisit the force equation, again using a 4 to 6 m/s running speed. We find that the contact time for this is of course longer, between 148 and 223 milliseconds. Combining these 'delta t' times with the vertical change in speed dvy, the average G-forces experienced now sit more comfortably between 1.5 and 2.3 Gs, i.e.

As peak forces are 1.5 higher than these values, they now are between 2.25 and 3.38, which is a far more realistic estimate.

I have often heard, and even read in some semi-reputable books that a goal for a seasoned runner should be to 'minimize ground contact time' (an example: Tudor Bompa's book, p. 41). This seemingly constructive goal strikes me either misguided or trivial. Trivial because as one runs faster one's ground contact time per stride inevitably decreases. This decrease comes without any special alteration to technique and is therefore pointless for an athlete to consider in any detail. The statement is also misguided because there is clearly a strong physical, natural deterrent to having short ground contact times. I have shown the effect of touching the ground for as little time as possible and the results are not favourable to one's biomechanics. I would even contend our bodies are not build to allow this to happen, i.e. you are physically required to extend the push off phase behind one's centre of gravity. Certainly impact forces are reduced by increasing turnover R (which as it grows decreases dv), but that is not exactly the same as taking steps that touch the ground for less time.

This is enough math for one day, so I'll officially stop here. Below is one final note about the non-role height plays in running.

A final note regarding the role height plays in running: Height tends to cancel out in most running-realted formulas, and here is another such example. Since running stride rate R is inversely proportional to heigh, i.e.

(where a and b are constants) and given that one's stride length and foot size are also roughly proportional to height, i.e.

(where c and f are proportional constants), we see that when calculating the g-forces then for a given speed v that H nearly cancels out:

Dividing through by H

it can be seen the height-factor as related to g-forces is dangling precipitously under the constant b (which I imagine isn't that big to begin with). Impact forces by taller people are spread over larger strides. Yet again we witness how height in the world of running has no advantage nor disadvantage. Fin.


____________________
*Of course running faster does burn more calories per unit time. An elite marathoner burns his or her 2800 Calories in a time of 2:05 - 2:30 compared with ~ 4 hours for the recreational sort. An elite runner is more powerful, but he or she does not expend less energy overall by running 'more efficiently'. It is important to realize the distance-invariant aspect of running faster: both elites and amateurs will 'hit the wall' at about 30km into a marathon. This is true no matter what their training regime might be. To be sure better runners hit the wall more gradually therefore minimizing the sudden effect in their speed. But they are in just as much an exhausted state as anyone else and why even elites never sprint to the finishing tape.